“In evil’s millennium, the squad-fate fell to Schiltron Toothcutter. The Rökthane’s commands combined metal and mettle so that worlds were won by iron arms and iron wills.”

I’ve taken to Kickstarter to produce a small range of resin cast 28mm scale Space Dwarf miniatures for collectors, modellers, painters, roleplayers and tabletop wargamers.  This Kickstarter will enable the figures to be professionally moulded for production, and vacuum-cast in high quality resin.

I’ve got a deep passion for the science fiction concept of squat and indomitable warriors heading out into the stars with an arsenal of hi-tech weapons.  I wanted to distill the essence of techno-fantasy metal mysticism into miniature form, and do it with an iconically 1990s twist.

Schiltron Toothcutter, Rökthane of the Naudor Thronesworn, is a leader who has earned the respect of his troopers a dozen times over.  His far-sighted view of the battlefield gives his squad a significant tactical advantage – and many battles have been won by the relentless advance or unbreakable defence he inspires.  Famously Schiltron and his warriors defended the Nethyr Edge for 13 cycles, saving countless lives.

Schiltron is armed with a customised binar-blaster, enscribed on the casing with his runic S initial, and clad in diamond-flak armour.

Each Röknaut Trooper is a hero in their own right, respected throughout the galaxies as bloody-minded and unyielding in the face of any enemy. Not only are Röknauts experts in combat, but void travel, toxic environs survival and hardware maintenance.  Their extreme technical aptitude lets them operate where other forces have been destroyed by mechanical realities – and their adamantine-hard will lets them fight even longer still.

Armed with the iconic Wyrmboltr Rifle, and clad in diamond-flak, the Trooper is a bold icon of the Röknaut Thronesworn’s might.

Those Röknauts with distinguished marksmanship are assigned heavy weaponry from the Röknaut armouries to support their squads. Capable of hefting a weapon on their squat shoulders that a human would need a tripod and a loader to operate as efficiently, these warriors are a redoubt on the battlefield, and many legendary figures from Röknaut folklore are famous for their excessive weaponry.

The Röknaut is armed with the deadly dual-barrelled Helstrom Autocannon, capable of obliterating opposing hordes with sustained fire, or rending a hole in the side of a battletank with a tightly focussed salvo.

Designed to fit in with the miniatures of your youth, the Röknauts  are sculpted as a love letter to the 1990s, when miniatures were characterful chunks of awesome.  The miniatures are scaled to fit with classic 28mm humans – the Trooper with Wymboltr Rifle measuring 18mm from boot sole to eyeball.

What you will Get

Pledging to this project will get you a complete squad of five Röknauts vacuum-cast in high quality resin.  Supplied unpainted and unassembled.

I love painting miniatures – it’s the primary way I engage with the whole collecting/painting/gaming hobby.  When the first Röknaut prototype arrived, I completely flipped out, whacked on some Savage Garden and entered a fugue state, only to emerge some hours later with the Rökthane fully painted.  I’m extremely biased when I say these miniatures are a joy to paint, so to triangulate if they’re fun-with-brushes I sent a set of advance castings to Oldhammer blogging supremo Jean-Baptiste.  He absolutely ripped through painting a whole squad of them in a magnificent weathered industrial yellow scheme.  Here’s his photos…

You can visit the project here. 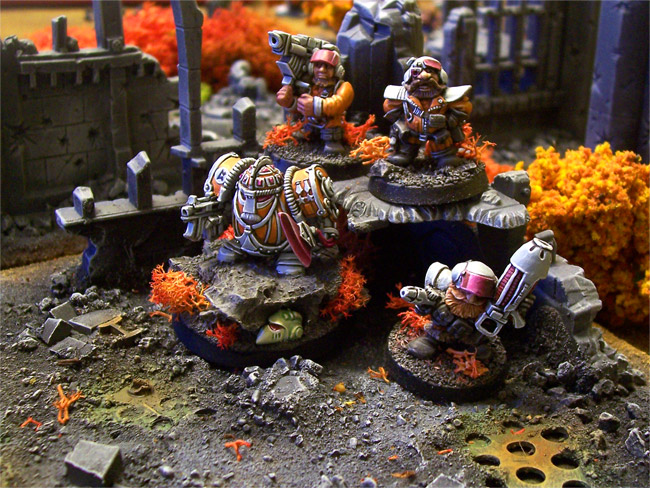 Exo-Armour Hearthguard and the Storm Giants

2 thoughts on “The Röknaut Space Dwarfs”