Time to collect a new Space Marine force!  Crimson Fists – the Rogue Trader poster boys.  These Fists are hand-picked from the 1987–1989 Imperial Space Marine ranges sculpted by Bob Naismith, Aly Morrison and Mark Copplestone.  I have a real soft spot for this era of Mk6 design.  There’s a certain je ne sais quoi to the early Warhammer 40,000 aesthetic that was lost when the Mk7 Jes Goodwin designs were introduced in 1990.  There’s a joyful bulbousness to them that reflects the early days of Rogue Trader, before it settled down into the tightly-codified juggernaut that endures to this day. Fist in, last out – Squad Onan.

Veteran Sergeant Onan’s casting had a damaged head, and has had a new one grafted on from a Golden Heroes Supervillain.  I added the bionic eye during painting to hide the incredibly long eyeball that continued round the side of his head.  The banner is tomato puree foil mounted on a brass rod pole.  The bladed bionic arm with its super-awkward pose is entirely original – if anyone know what he’s actually meant to be doing please leave a comment. The backpacks and other elements were sculpted with a beautifully ham-fisted assymetry.

I’ve settled on the rule of left-hands-crimson on Battle Brothers, and both-hands-crimson on Veterans.  The Heavy Bolter Marine has Veteran status to justify him wearing a Power Glove.  I particularly love this model as his nonsensical wargear (that’s illegal in all future editions of Warhammer 40,000) places him firmly in Rogue Trader territory.

My rendition of the Crimson Fist icon is based on the banner from the Rogue Trader cover, but I’ve experimented with simplifying the thumb/forefinger area between Marines.  Since their armour designs differ so much I’m not going to revisit and amend any designs once I’ve settled on the final iteration.

This hobby is called: The Freehand Fists Hobby.

I couldn’t resist adding the correct weaponry icons and armour graffiti too.  I’ve got to add a Medic to the force simply so I can scrawl “FIST AID” on his armour.  I also fancy a Marine with “FIST BUMP”.  In fact I’ve got a whole list of quickfire “FIST” and “HAND” phrases ready to deploy.

I’ve planned 1,000 points using the Whitescars army list from the Book of the Astronomican.  This era of army list is the sweet spot for me.  Space Marines have been rounded out from the single squad type presented in the Rogue Trader rulebook, but it’s before a lot of their iconic troop types have been dreamed up – no Terminators, no Scouts, no Rhinos, no Techmarines.  On one hand they’re recognisable enough to a modern Warhammer 40,000 player, but on the other hand there’s a smattering of ideas like “Cobra squad” and “Reconnaissance squad” that have since disappeared from the background.  I love this particular early incarnation of the Warhammer 40,000 universe where the concepts are still crystallising.

The full force (17 Marines on foot and a Dreadnought) is partially based on the seminal Rogue Trader Battle at the Farm scenario (which was Pedro Cantor plus fifteen Tactical Marines), but I’ve spiced up the weapon choices for the sake of variety and model availability.  Here’s the first squad defending make-shift farm barricades! Bonus Ninjabread points if you can spot where Tech-priest Theodolitus is hiding.

Sho3box has very generously lent me Skabsquig’s Skallywags for these Battle at the Farm photos.  You can see more of them here and here. This terrain I’m using as the iconic Rogue Trader farm is going to launch on Kickstarter imminently from the excellent Fogou Models.  Mr. Fogou sent me an advance casting in return for me taking photographs like this.

I’ve been getting a lot of questions about how I paint Crimson Fists, so I photographed a Marine inbetween each step of the blue power armour process. If you want to see these steps broken down, wth the techniques and theory behind them spelt out the tutorial is available on Patreon. The skills you’ll learn are transferable to all colours of power armour.

Ultragreeting, patrons. Thanks to all of you for your support for the painting tutorials this May. Welcome to new and returning patrons David, John, Chris, Keith, Roman, Nathan, Tory, Patrick, Yoni and Ed! 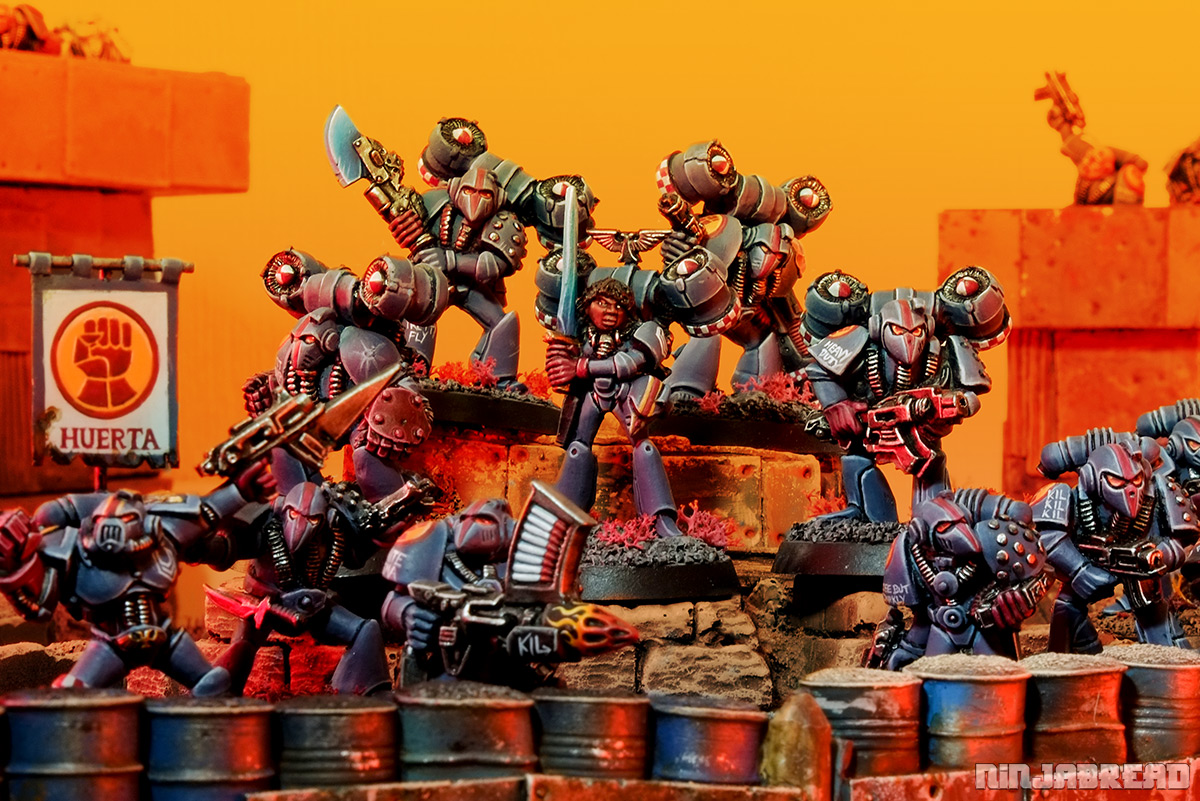