Brimstone Horrors!  The cheeky pairs of scampering bastards you get when you kill a Blue Horror.  I’ve painted four sets of these quarter-daemons, but with an Oldhammer twist. And it’s all in how you mix the two.
And it starts just where the light exists.

Ever since 1989, Pink Horrors split into a pair of Blue Horrors when killed – it was the Tzeentch lesser daemon gimmick.  But when Silver Tower arrived in 2016, the GIMMICK ALSO SPLIT IN TWO as Blue Horrors started to split into pairs of Brimstone (or Yellow) Horrors.  This troubled me for a little while, as there are several generations of vintage Pink and Blue Horror miniatures with no corresponding Brimstone Horrors if you want to use them with modern Age of Sigmar and Warhammer 40,000 rules.  But then I remembered the tiny Epic-scale Pink Horrors from 1992.

Do your demons, do they ever let you go?

Epic was nominally a 6mm game, but these Horrors were hilariously overscaled and make great 28mm familiars – as I discovered way way back in 2010 when I painted Inconstantine Bowie, Champion of Tzeentch. Turn and face the strange
Ch-ch-changes

It has taken me a while to work out why yellow was chosen as the colour for the new tiny Horrors.  The answer is in this passage from White Dwarf 113 (May 1989), which highlights the importance of colours in the early Warhammer lore.

Tzeentch is the Changer of Ways and, true to his nature, he has more than a single colour. The Pink and Blue Horrors, Daemons of Tzeentch, use magic of their own actual colour, reflecting the changing forces of their master as they turn from pink to blue. However, aside from the Pink Horrors who are associated with the Amethyst College, Tzeentch’s colours are very bright shades of blue and yellow. These colours are often dominant, though by no means exclusive, in the worship of Tzeentch. The two colours are particularly significant because they are the province of the Golden and Celestial Colleges which lie either side of the green magic of Tzeentch’s adversary Nurgle. A follower of Tzeentch could therefore be inferior or superior to Nurgle depending on his colour.

I really like how daemons align to the Colleges of Magic, and will use it as an excuse to model some Golden and Celestial Wizards to be corrupted by Tzeentch. Wave your hands in the air like you don’t care.

These newly painted Horrors join my existing 1980s Kev Adams Horror force I started 9 years ago. I’ve rebased these minis onto 32mm round bases which means they don’t have any of their toes poking over the edge.  They’ve seen plenty of gaming action down the years so there were a fair few chips to repaint.  I really enjoyed the restoration; it was like catching up with old friends, or wearing an old t-shirt from back when you were 14.

New and old paintjobs together mean I’ve got all 10 of the various daemon incarnations needed to play Silver Tower. Coming soon, more vintage lead substitutes for the modern plastic pieces in Silver Tower – some of which you may’ve already spotted on the Ninjabread Workbench. 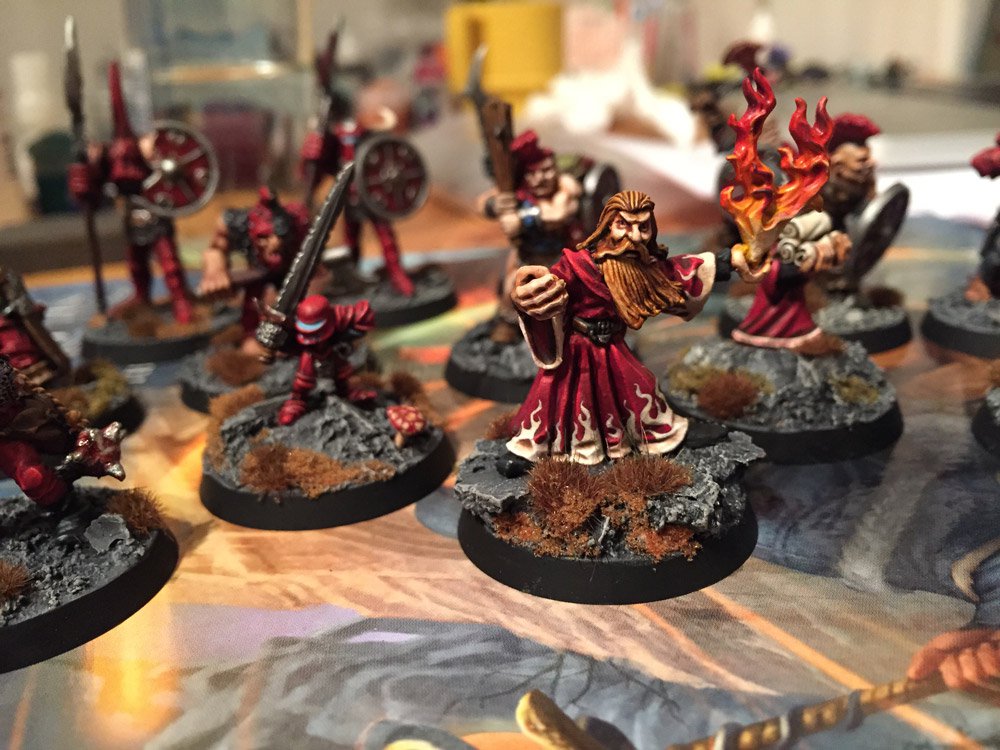 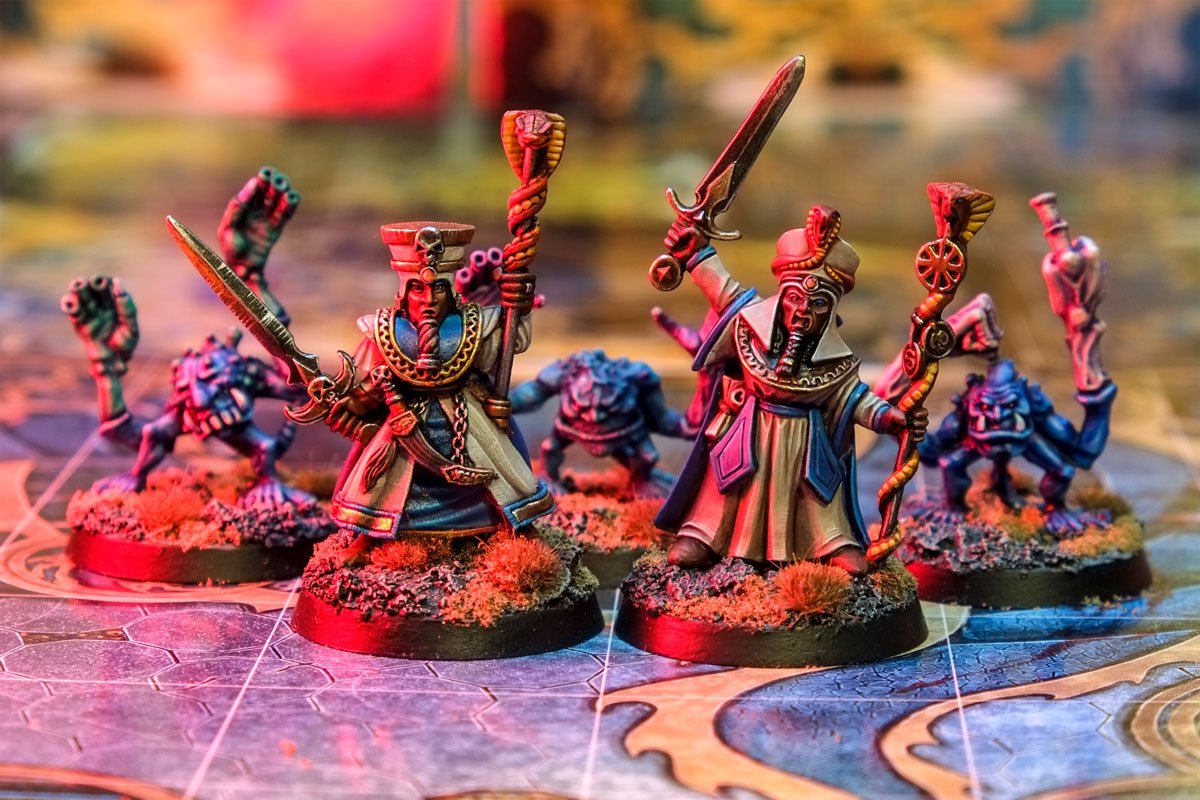 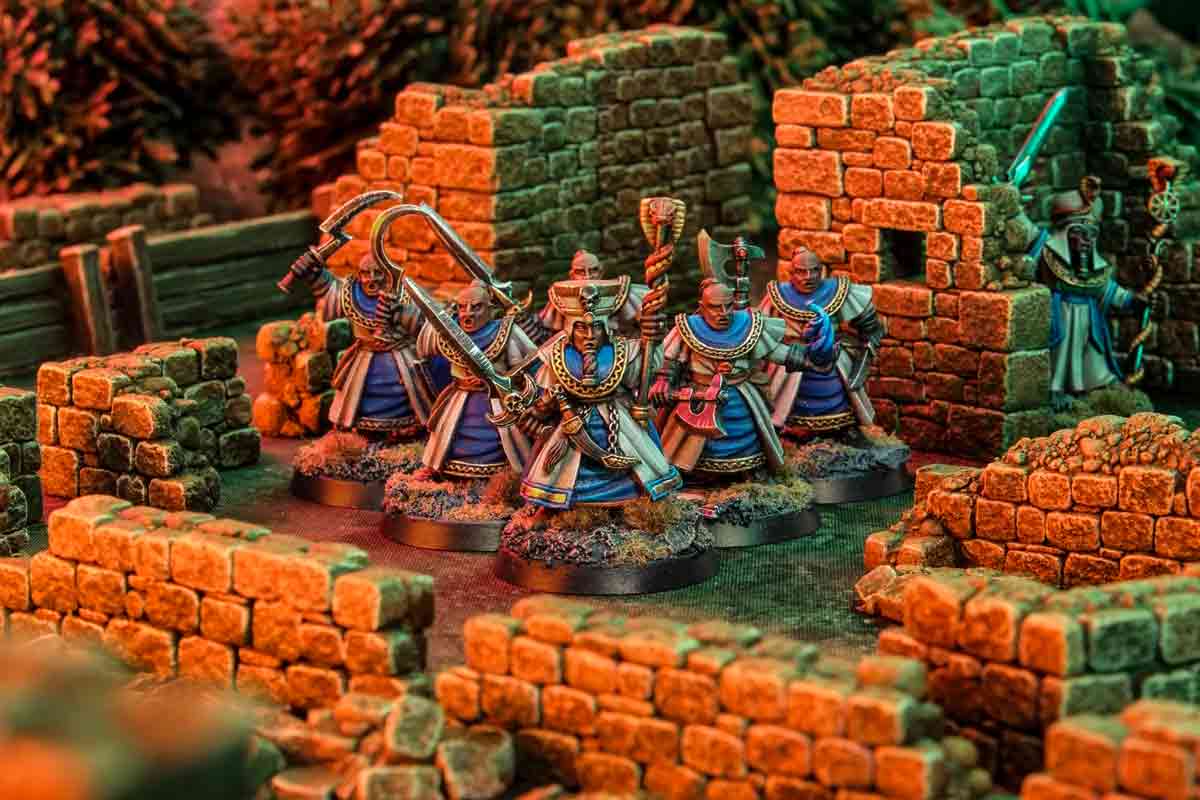