It’s Christmas time, so enthusiasm for the ultimate Christmas films – The Lord the Rings Trilogy – has enveloped Ninjabread towers.  While binging on DVDs and mince pies, I’ve painted a breakfast (that must be the collective noun) of vintage Games Workshop Hobbits. These are the four Halflings from the BME1 Fellowship of the Ring boxed set.  They’re wonderfully characterful – Frodo with a troubled expression, gazing towards Mordor, rings of his Mithril shirt peeping out from under his sleeves.  Sam looks very much the bimbler.  Merry and Pippin are the pint-sized action heroes jumping in to defend Frodo with their Barrow-blades.

Since 2001, Games Workshop’s highstreet stores have sold minis based on the movie trilogy – buuut these aren’t them.  In 1985 Games Workshop were selling minis to support Middle-Earth Role Playing (MERP) game.  It was a range of a few hundred figures which includes most of the major heroes, villains and troops. ME-63 Witch-king of angmar leading a the ME-64 Black Riders.

I’ve also painted up a selection of Ringwraiths to chase those pesky Hobbits around the countryside.  I’ve gone for four repeats of the same pose so they look like they’re advancing in unison, performing a ritualised Hobbit-slaughter like the movie’s Brie and Weathertop scenes.  In my mind it works, but in photos they come across a bit dance troupe.  More Lord of the Dance than Lord of the Rings.  Oh well. “I can’t believe you started the conga without me.” – Witch-king of Angmar I’d like to find these figures and paint them as the Witch-king of Angmar and the sorcerers of the Second Age as they appeared before Sauron gave them their magic rings.  Or maybe as the ghostly forms Frodo sees when he puts on the One Ring.  Or maybe actual Warhammer wizards. The Hobbits defend themselves from Ringwraiths in the ruins of Weathertop.

I’ve enough Ringwraiths and Hobbits for several scenarios from the first half of Fellowship of the Ring now, and will spend Christmas recreating the Hobbits getting repeatedly stabbed in various locales of Middle-Earth. If you become a supporter today you’ll get access to this in-depth masterclass tutorial, and also the back catalogue, which covers last month’s Golden Demon winning entry, two varieties of Space Marines power armour, and human flesh.  Thanks to everyone that ha signed up so far this year.  Thanks to this month’s new patrons: Liam, Claudia, Daintist, Craig, Dan, Jason, Andrew, John and David.

I think next I’ll work on some more prey for the Ringwraiths based on the early chapters of the Fellowship – probably the ME-25 Rangers of Ithilien reimagined as the Dunedain secretly defending the Shire, or a Gildor once I’ve worked out a suitable vintage Warhammer Elf.  Watch this space!  Merry Christmas everbody! 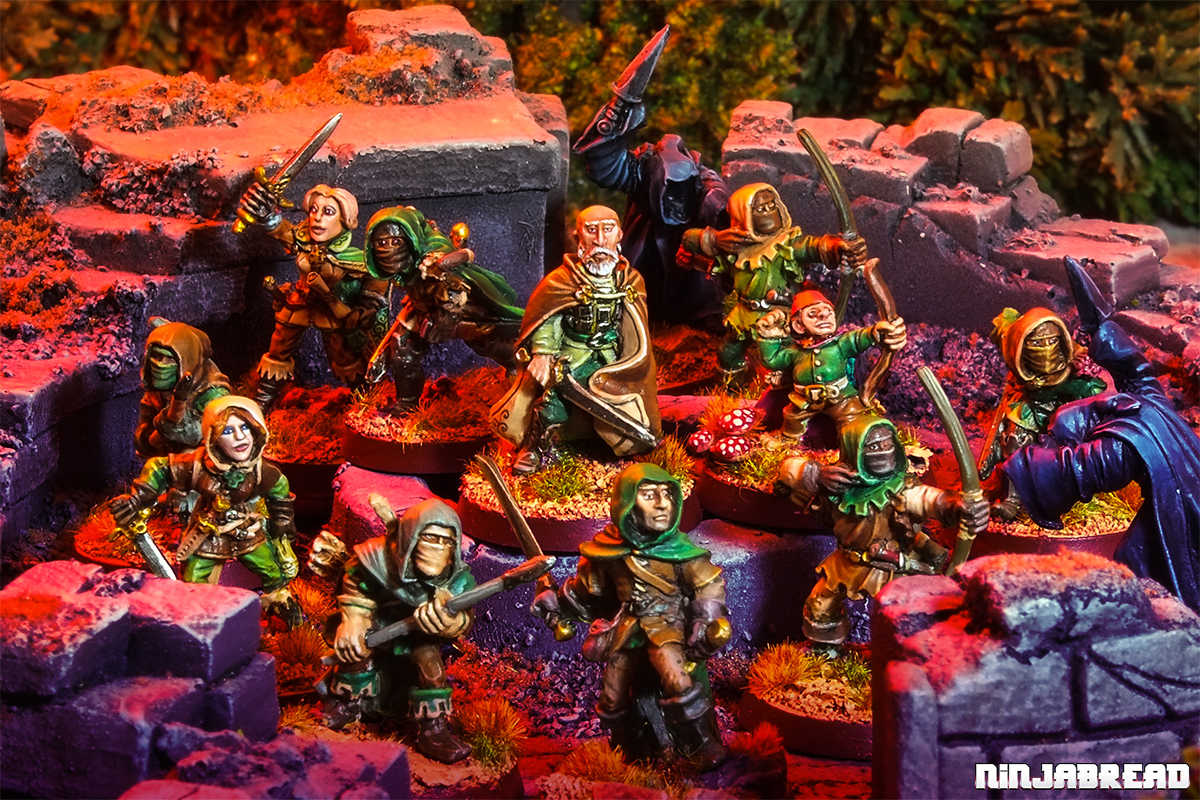 Aragorn and the Dúnedain

8 thoughts on “Classic Lord of the Rings Hobbits and Ringwraiths”