It’s the end of the line for the Blandford Warriors!  All twelve in this limited series of classic 1988 Citadel Miniatures are now painted and standing alongside each other in the cabinet, jostling for position of most dramatic medieval warlord. The final triumverate are spread across a thousand years of European history.  Let’s take a look at them each in turn.

Chances are you’ve not heard of Aetius, but you’ll have heard of his most famous opponent – Attila the Hun.  Aetius and Attila clashed at the Battle of the Catalaunian Plains in AD451 – one of the greatest bloodsheds as the Western Roman Empire crumbled under the weight of barbarian invaders.  Aetius was supreme commander of all military forces in the west, and crushed the Huns, stopping their advance into Gaul, and ultimately breaking Atilla’s tribal empire – earning him a place in history as the last of the great Romans. Flavius Aetius and his supporting Blandford Warriors – Alan Horseman and Bucellarius of Majorian – leading the defence of the Empire.

I really enjoyed painting Aetius, and mounted him a small rocky outcrop so he cuts a commanding presence over my Late Imperial Roman.  The mini is at least 20 years older than his rank-and-file counterparts, so he needs the height along the more modern, bigger figures. The Warlord Aetius and a Burgundian retainer attacked by a Hun at the Battle of the Catalaunian Plains, northwest France, AD451.

Aetius has the unique honour of being the titular star of both a wargame AND an opera by Handel.  The wargame is Aetius and Arthur (which must be 50% about him if you go off just the title).  The opera is Ezio (that’s Italian for “Aetius”), and sees our general returning home from defeating Attila, trying to disentangle himself and his future wife from a plot to assassinate the Emperor.  This is the only Citadel miniature I know of which has an opera about it, until my own work, Marneus Calgaro Maestro di Ultramarines, debuts this winter.

This miniature is Owen of Wales (“Owain Lawgoch” if you’re Welsh), who was a mercenary captain in the Hundred Years War (c. 1330 – 1378).  He hated the English so much he sided with their arch-nemesis, France, hoping his military service would ultimately help him claim the Prince of Wales title.  He was killed by a sheep (well, an English spy named “Johnny Lamb”). Bertrand du Guesclin and Owen of Wales fighting together, united in their hatred of the English.

I had a load of fun painting all twelve of the lions rampant on his heraldry.  They are the arms of the royal house of Gwynedd – which Owen would have worn to cement his image as the rightful Prince of Wales. Now, let’s all take a moment to reflect on the name of the Swiss municipality in the caption below. Owen of Wales is pursued by halberdiers from Berne at Buttisholz, Switzerland, 1375.

Now, there is a later Owen of Wales, (c. 1359 – c. 1415).  A contemporary chronicler claimed this Owen of Wales (“Owain Glyndŵr” if you’re Welsh) adopted the name as he was inspired by the earlier medieval warlord.  This is the Owen that instigated a rebellion against the English and got as far as establishing a proper Welsh parliament.  Nowadays the Welsh celebrate him as a symbol of nationalism with their statues, their ship names, their music awards and their Manic Street Preacher songs.  (Seriously, the Manics did the song 1404 all about this lad.) Owain Glyndŵr and his Welsh followers are attacked by the English garrison at Caernarfon Castle, AD1401.

This later Owen pops ups in another Angus McBride illustration from Celtic Warriors that’s 83% more liontacular on account of that horse’s barding.  That looks like an fun challenge to paint.

Vlad Dracula, rose to power as Prince of Wallachia by impaling all the leading nobility on stakes in a single night and replacing them with a new totally-loyal nobility raised from the peasantry.  He held on to power with the same impailment tactic – political enemies, suspected traitors, even whole armies of Turks found themselves with sharpened wooden stakes through their torsos.   His brutality and violent excesses saw him dubbed “Vlad the Impaler” within his lifetime, and his legend has grown since his death to the point of him being the most iconic vampire in the modern popular imagination. Vlad was a member of the Ordo Draconis, which was founded by the King of Hungary to stamp out the enemies of Christianity (including the likes of fellow Blandford Warrior Jan Žižka).  Though ostensibly Christian, Dracula never quite grasped the essence of the religion – attempting to demonstrate his faith to the King of Hungary with a gift of two bags of Turkish heads, ears and noses.  See how well that gift goes down with your vicar. Dracula supervises the execution of prisoners after a raid on a German settlement in southern Transylvania, 1460.

The heraldry of the Ordo Draconis, in the Angus McBride plate above, is a dragon swooping down on some sort of serpentine monster.  Ordo Draconis is where Dracula’s father – Vlad II Dracul – got his name from, and “Dracula” is the diminuitive form – “little dragon”. Dracula, looking every inch the cock of the town, though at 5′ 2″ it’s not many inches.

Vlad eventually died on the battlefield in AD1476, fighting the Ottoman Turks.  They cut his head off and sent it to their Sultan, who impaled it on a spike.  However, Vlad had converted from Greek Orthodoxy to Roman Catholicism during his lifetime – something considered so heretical that Wallachian folklore claimed that on death, any such heretic would transform into… a vampire.

I enjoy grouping the figures from different chapters of Medieval Warlords together (like the Taborite Infantryman and Dracula) to make the figures cross over.  I can even draw a connection through a thousand years of time between Aetius (representing the earliest medieval warlord), and Dracula (the latest):  Aetius defeated Attila the Hun, and Bram Stoker’s Dracula character was a member of the Hungarian tribal group that claimed direct descent from those Huns. That’s each and every Blandford Warrior painted.  The set is complete.  Project over.  Now I can give my historical wargaming energy to something else.  Reinforcements for my Normans?  Siege of Oxford?  Early Imperial Romans?  Late Imperial Romans?  I’m giddy with excitement, all I can say with certainty is that’s the end of my Blandford Warriors.

Stay tuned to Ninjabread for more minis.  If you fancy your own set of Blandford Warriors they’re available from the excellent Wargames Foundry. 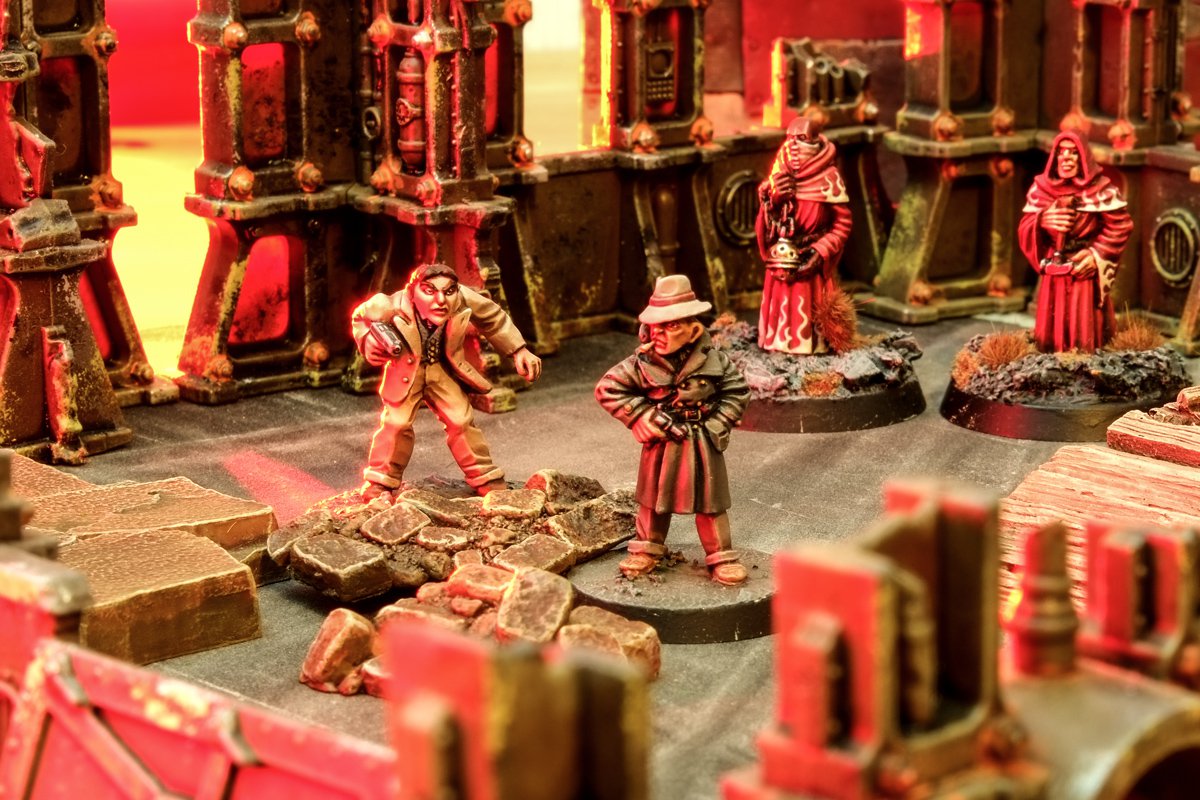