It’s the first Choose Your Own Adventurers of 2018, a group project where axiom, sho3box and I take turns painting a classic from the Rogue Trader Adventurers range.  This time I present Battle Brother Groma from the Crimson Fists Space Marine Chapter, and Ruin Priest Theodolitus from the Adeptus Mechanicus. Only the strongest will surv-ey.

This pair came into being as I’ve already painted iconic archaeologist Indiana Jones for the project, and it’s made me want some more Warhammer 40,000 excavation personnel.

Theodolitus is an Adeptus Mechanicus Ruin Priest (not to be confused with the Rune Priests of the Adeptus Mechanicus or Space Wolves), specialising in archaeological investigation.  You can see from his hunched back and tattered trousers that Theodolitus has spent his entire career painstakingly trowelling back trenches hoping to uncover archaeotech secrets and alien artefacts from ancient times.  He is a very different adherent of the Cult Mechanicus to the Tech-priest Enginseers normally seen repairing machinery mid-battle; Theodolitus only works on battlefields abandoned centuries ago.  Actual warfare – he wouldn’t touch that with a ten foot pole. Check out the holstered trowel added to the Ruin Priest’s belt.

Theodolitus is a minor conversion of the standard RT601 Adventurers Tech-priest.  I replaced his staff with brass wire, but kept the original top with its 1980s Adeptus Mechanicus wing symbol – simply flipping it backwards and adding a ball of putty painted like a survey lens.  On the back of his belt I added his trusty archaeology trowel – “Trenchbane” – made from a diamond of plasticard, a length of wire, and putty. Battle Brother Groma has been temporarily requisitioned by from the Crimson Fists Chapter to serve with the Explorators of the Adeptus Mechanicus.  Groma served in his Chapter as a Fire Support Specialist, relaying the coordinates of the rocket strikes of the Crimson Fists’ Whirlwind formations.  He is equally at home operating the las-survey devices of the Adeptus Mechanicus to record their archaeological digs, though it took him time to adjust to the tedium of measuring points on a landscape without witnessing their fiery destruction seconds later.

I converted Groma from the biker-with-scanner torso from the 1980s Space Marine bike range.  His legs are a mongrel of metal biker legs and RTB01 plastic legs.  The tripod is plastic rod, and bits box spares.  The toolboxes with dinky padlocks are courtesy of Ramshackle Games.

I decided on Crimson Fists colours as it’s the iconic Rogue Trader look, and it might lead in to a Battle at the Farm project later in the year.  I experimented with several different blues, trying to keep him away from the Ultramarines Blue as seen on my Rogue Trader Marneus Calgar, settling on a mix of Citadel Mordian Blue, Citadel Mechanicus Standard Grey and Vallejo Royal Purple.  The key to a classic Crimson Fists scheme is staying away from white and gold, and getting in a lot of crimson. Groma sometimes imagines Theodolitus and his sodding pole obliterated in a storm of rocket fire when he glimpses him through his sights.

Check out sho3box for the next thrilling Rogue Trader miniature!  You can find a selection of the other Choose Your Own Adventurers episodes below. 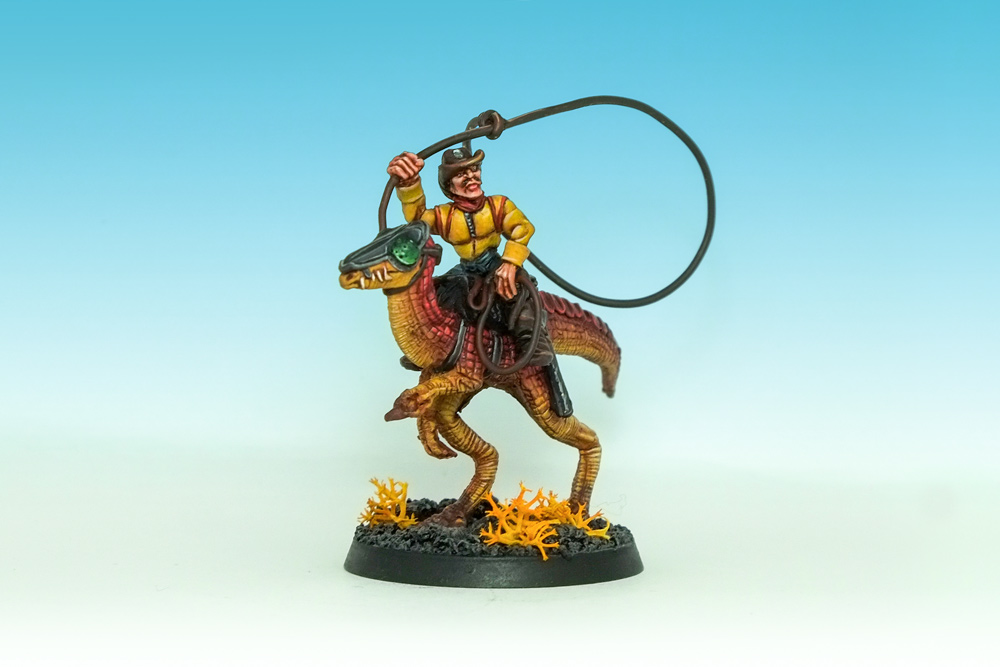 30 thoughts on “Choose Your Own Adventurers #17: Theodolitus, Ruin Priest”