They’ve come to destroy the xeno-filth of the galaxy just like the beetles destroy your antique furniture. I suppose they’re not the only Space Marine chapter named after insects – there’s Mantis Warriors. But Mantises are cool insects that do decapitation and look like samurai. Maybe my problem with the Deathwatch name is just me, growing up binging on episodes of Antiques Roadshow and Lovejoy, and Joe Public just thinks it’s kewl as it starts with “Death” and death is kewl.

The Primaris Aggressors’ poses are entirely fixed, so the closest thing you get to choice is slicing the tag off the heads so you slightly twist them, though not too much as they’ll just end up staring at the inside of their armoured hoods. Fixed poses aren’t a bad thing, if they’re dramatic, but all three are “video game character selection screen” poses. It would have been cool to them pointing their guns not at the ground, and have the Sergeant pointing dramatically. But attempting any of that requires a filthy amount of modelling work, re-engineering all the pipes and ammo feeds.

So, with no reposing potential, I stamped these Deathwatch as “mine” with a big freehand banner on the Sergeant. It’s taken from the Ironclad Dreadnought kit – just like my Nemesis Chapter Intercessor Sergeant. The design is a combination of the Deathwatch and Ultramarines chapter icons, bordered with black and white checks. I was super-keen to get Ultramarines icongraphy front and centre since both the Sergeant’s shoulder pads are taken up with sculpted details.

I picked out the Deathwatch skull in red with a white stripe (along with the skulls on the fist, leg and shoulder), echoing the Codex Astartes veteran sergeant helmet markings. He’s named Amorgaudium as it’s High Gothic for Lovejoy – a rascally antiques dealer who understands how terrifying Deathwatch Beetles are.

I’ve photographed and written up a masterclass tutorial with all the steps, paint mixes and theory for the black on these Deathwatch. If you’d like access, it’s over on the Ninjabread Patreon page, along with over a dozen other masterclasses.

The squad’s now ready to join my Nemesis Chapter army as an Auxiliary Support Detachment. What next for the army? Maybe some Troops, maybe some HQ, (Death)watch this space! 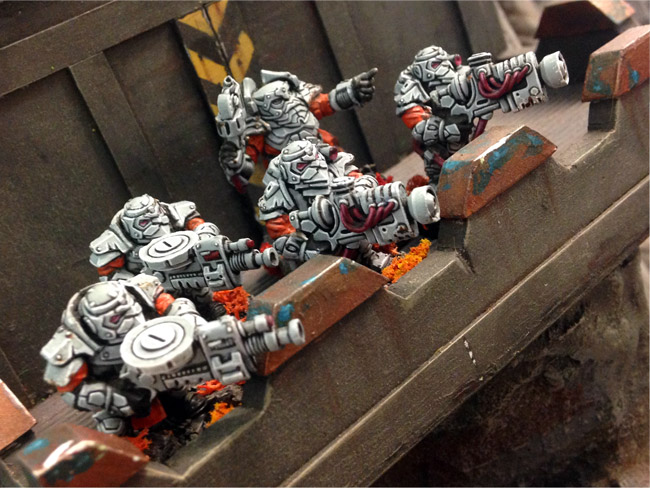